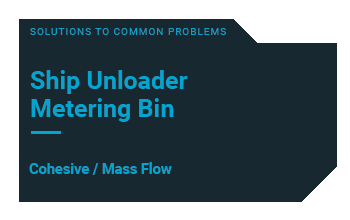 This is an example of a ship unloading hopper designed specifically to handle difficult flowing cohesive materials such as gypsum and bauxite.

Standard ship unloading hoppers use a pyramid hopper that converge to a small opening that use a slide gate or clamshell to control discharge.

The solution to a reliable ship unloading hopper that is capable of handling difficult flowing cohesive materials has two parts. The first half of the solution is to use a plane flow hopper shape with a wide and long discharge opening. A plane flow hopper only converges in one plane at a time, and is vertical in the opposite plane. The plane flow hopper is the most conservative hopper shape. The purpose of using a conservative bin shape with a long and wide discharge outlet is to employ a geometry where if the Feeder were removed, the entire bin would self-empty with gravity in a mass flow or first-in, first-out discharge pattern.

The second half of the solution is to pair the plane flow hopper with a Kamengo Feeder. The value of the Kamengo Feeder is that it withdraws material evenly from its entire opening, which by definition is necessary to actually achieve a mass flow discharge pattern in the hopper, which is necessary when handling a difficult flowing, cohesive bulk solid.

To learn more about the physics of storage bin and feeder design as well as the root causes of bin plugging, please visit KamengoU. 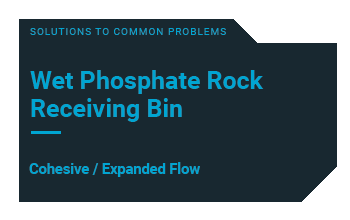 This is an example of a series of wet phosphate rock receiving bins that are suffering from chronic bridging and rat-holing. It is a good example of poor bin geometry combined with uneven discharge that is resulting in inconsistent discharge.

The alternative to funnel flow is mass flow, which is a first-in, first-out discharge pattern. The definition of mass flow is that during discharge, the entire mass of stored material comes down as a single body (single mass). To achieve this, material must discharge evenly from the entire discharge outlet of the storage bin. The tell-tale sign that you have mass flow is that material is sliding down the bin walls.

The solution to fixing this problem storage and feed system has two parts. The first half of the solution is to replace the lower pyramid hopper with a plane flow hopper with a wide and long opening. The wide and long discharge opening is required to overcome the bridging dimension of wet phosphate rock. Overcoming the bridging dimension is necessary to ensure that the material cannot bridge over the feeder. Changing the bin geometry will promote a mass flow discharge. Mass flow is a first-in, first-out discharge pattern.

The second half of the solution is to pair the new plane flow hoppers with a fully-effective feeder – that is a feeder that withdraws material evenly from its entire infeed opening. Again, by definition, to achieve mass flow, where the stored material comes down as a single body, the feeder must withdraw material evenly from its entire opening. If the Feeder withdraws material selectively from the bin discharge outlet, sections of material in the bin will be stagnant and funnel flow will ensue.

To learn more about the physics of storage bin and feeder design as well as the root causes of bin plugging, please download our white paper entitled: The Design of Reliable Storage Bins and Feeders for the Mining Industry.

Close Menu
Manage Cookie Consent
To provide the best experiences, we use technologies like cookies to store and/or access device information. Consenting to these technologies will allow us to process data such as browsing behavior or unique IDs on this site. Not consenting or withdrawing consent, may adversely affect certain features and functions.
Manage options Manage services Manage vendors Read more about these purposes
View preferences
{title} {title} {title}